Join us on February 11, 2021, at 3 pm CT for a virtual version of our 2021 Annual General Meeting (AGM)! Everyone in the community is welcome and encouraged to attend.

If you’re a voting member of FAI, you’ll be receiving an email soon with the agenda, meeting documents, and a Zoom link to join the AGM (with the ability to participate and ask questions).

Non-members are also invited to join! You’ll be able to view the live AGM on our YouTube channel. 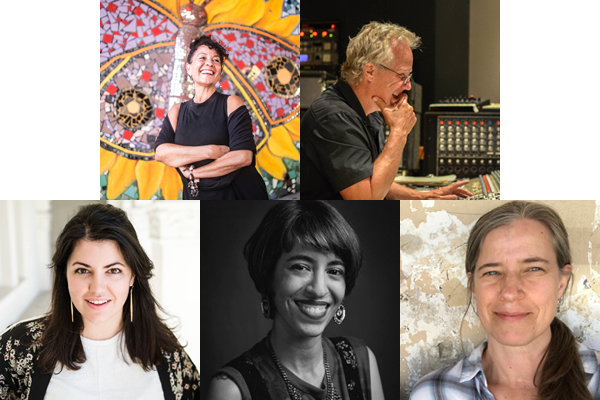 We’re thrilled to announce the results of our 2020 FAI Board Election! We’ll be welcoming two new members, in addition to the re-election of three current board members. Each director serves a three-year term, beginning at the AGM in February:

Catalina Maria Johnson, Ph.D. is a Chicago-based journalist, broadcaster, and music curator. She hosts and produces her own radio show, Beat Latino, which airs in Chicago and other US cities as well as Berlin. Catalina also regularly contributes to NPR, Bandcamp, Billboard, Downbeat and other outlets. Thanks to the tenacious insistence of a Mexican mom and a German/Swedish dad, Catalina received the gift of a bilingual and bicultural heritage. Her cultural journalism explores the immensely rich diversity of the global music scene in all its variations, and in particular, music as it intersects with culture, identity, and migration.

Gary Paczosa is a multi-Grammy winning producer and engineer. He is best known for his work with Alison Krauss, Dolly Parton, and Sarah Jarosz. He has served on the Grammy board and also works as head of A&R at Sugar Hill Records in Nashville.

In 2012, Amy Reitnouer Jacobs co-founded The Bluegrass Situation (BGS) with actor/comedian/producer Ed Helms (The Office, The Hangover). Today she serves as the executive director for the company, which encompasses online editorial/content creation, event promotion, and targeted audience marketing. In addition to producing a festival, BGS has curated stage takeovers at Bonnaroo, Newport Folk, MerleFest, Americana Music Fest, Bourbon & Beyond, The Long Road (UK), and others. The website has also become an advocate for change, diversity, and representation within the broader music community. Amy is also an artist manager for Aubrie Sellers, Matt the Electrician, and Mikael Jorgensen (Wilco).

Ashley Shabankareh (she/her/hers) is a musician, arts administrator, and music education and creative economy advocate. Ashley currently serves as the Collaborative Action Strategist for Artist Corps New Orleans, Director of Learning and Development for Upbeat Academy, and the Education Specialist for the New Orleans Jazz Museum. She also serves as the Vice President for the Jazz Education Network and Board Chair for the Music and Culture Coalition of New Orleans (MaCCNO). Ashley is a trombonist and vocalist and performs with Marina Orchestra and The Asylum Chorus. Previously, Ashley served as the Director of Programs for Preservation Hall Foundation.

Laura Thomas is the agent and owner of ComboPlate Booking, which opened in 1999. In addition to artist-based tour services, volunteerism and community have been integral to Laura’s business. Since 2001, Laura has presented volunteer musicians at a monthly soup kitchen concert in Austin, Texas. In 2002, Laura started South By Soup Fest, a multi-day showcase at the soup kitchen. Since 2005, Laura has organized a day party raising funds for the same soup kitchen.

Appointments to the Board

Earlier this fall, as permitted in our bylaws, the board appointed three new members, and also extended our treasurer’s term by appointment. Each of these appointed directors will serve a 2-year term, beginning at the AGM in February:

Kevin Dalton is a Certified Financial Planner ™️ with 15 years of accounting experience in the music industry in his role at Wiles+Taylor & Co. and at Copyright Exchange where he analyzed earning trends and valued copyright catalogs. Kevin represents an array of artists across many genres. He resides in Nashville with his wife and two children.

Carolina Rojas is the Marketing Director at Circulart (the premier market for Latin American music), where she is also responsible for international relations and strategic alliances for the organization. She is also the Director of the Magdelena Festival in Honda, Colombia. She had led projects for the Colombian Ministry of Culture, ProColombia, and REDLAT, and has spoken on industry panels at conferences including Womex, Musica Mundo in Brazil, China’s Sound of the Xity, and Folk Alliance International. She is the co-founder of Cóngolo Travel, and has a degree in Business Administration and a post-graduate degree in marketing from Eafit University, in Medellín.

Caroline Randall Williams is an award-winning poet, novelist, and cookbook author (Soul Food Love) as well as an activist, public intellectual, performance artist, and scholar. Born and raised in Nashville Tennessee where she is deeply connected to the music community she studied at Harvard and Oxford and joined the faculty of Vanderbilt University in 2019 as a Writer-in-Residence in the Department of Medicine, Health, and Society while she continues to work and speak to the places where art, business, and scholarship intersect, moving people closer to their best lives and corporations closer to their ideal identities. Named by Southern Living as “One of the 50 People changing the South,” the Cave Canem fellow has been published and featured in multiple journals, essay collections and news outlets, including The Massachusetts Review, Essence, and the New York Times.

Alka Sharma is the Executive Director of Folk Music Ontario, previously the Ontario Council of Folk Festivals (OCFF), based in Canada’s national capital, Ottawa. In this role she oversees the operations, staffing and programming of Canada’s largest folk music industry event. Prior to this role she worked as the Interim Executive Director at the Toronto Reel Asian International Film Festival coordinating the country’s largest multicultural cinema event. Preceding that she served as the Senior Manager of Operations with the prestigious Toronto International Film Festival. She completed her Bachelor of Arts degree at Carleton University specializing in History and Political Science.