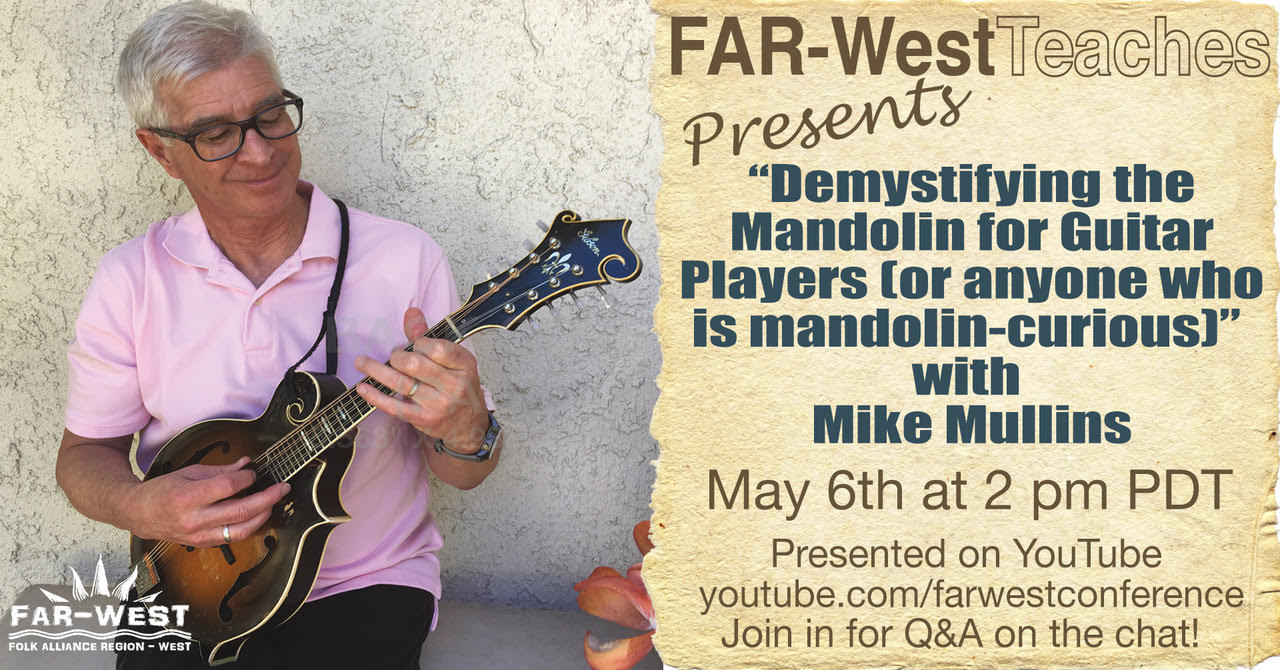 Many of us have been doing our adventuring and exploring new horizons these days from the comfort of our homes. Maybe you have thought about learning a new instrument? Many guitar players add mandolin as a second instrument. This FAR-West Teaches workshop is for those contemplating such a move or anyone just interested in learning to play this versatile instrument. On Thursday, May 6, 2021 at 2 pm PDT, FAR-West Teaches presents “Demystifying the Mandolin for Guitar Players (or Anyone Mando-Curious)” with Mike Mullins.

Mike Mullins has been a regular fixture on the California acoustic music scene for over 35 years, and he has been the guitarist for the Cache Valley Drifters since 1993. Mike has appeared on over 100 recordings and in 2014 released his first solo project, “Windows of Time,” a compendium of guitar and mandolin Americana styles showcasing Mike’s original material over a 25 year span. In addition to his acclaim as a solo artist, Mike is widely regarded as a top-tier mandolinist. For multiple summers Mike was an artist-in-residence at David Grisman and Mike Marshall’s Mandolin Symposium. Mike’s new project, “8-String Sketches,” a collection of solo mandolin pieces, is scheduled for release in May 2021 on Acoustic Disc Records.

Mike will cover a wide variety of topics in this quick-moving, informative workshop. He will discuss different types of mandolins, basic chords and scales, comparing string intervals on mandolin and guitar, repeating shapes, right hand technique as well as tremelo and various playing techniques that can be used. There will be a Q & A opportunity and Mike will suggest follow-up materials for your journey toward becoming an “8-string pilot.”

Mike is a virtuoso performer looking to share his love of the instrument to inspire a new generation of pickers. This is a rare opportunity to hear from a musician who approaches his instruments not from a theoretical point of view, but from the language of sound. You do not want to miss this amazing opportunity to learn from this legendary musician! www.mikemullinsmusic.com