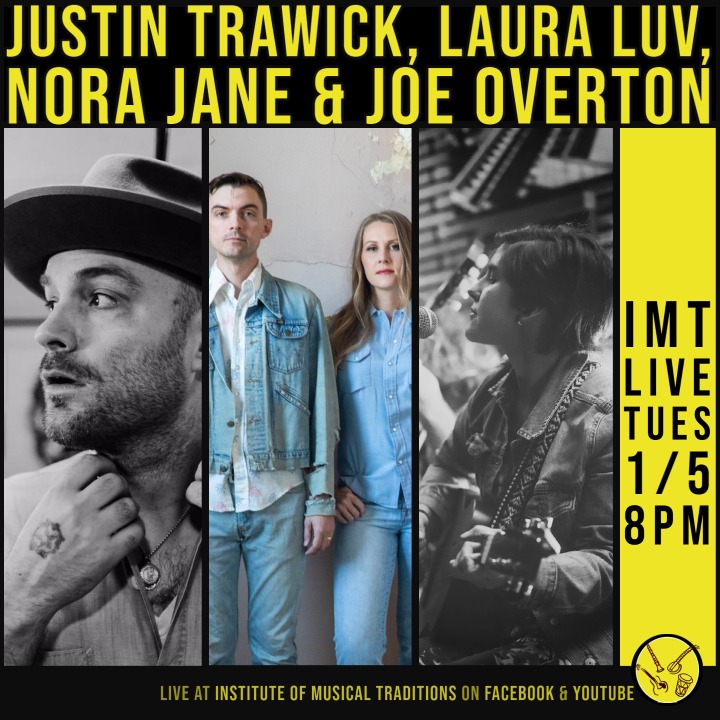 Dave Eisner hosting for a webcast with some favourite performers! Tune in Live at facebook.com/Institute.of.Musical.Traditions and / or youtube.com/imtfolk as we build our Traditions in a new way.

Laura Luv is a singer-songwriter from Colombia. She writes songs in Spanish influenced by her life experiences and what is happening in the world today. Some of her lyrics have been interpreted by others as a call to consciousness and people can easily relate to them. For example, the song “Déjame Ser” (Let Me Be) is about animal abuse, and “Apaga la luz” (Turn off the light) is about global warming. Musically, Laura Luv has been influenced by pop, rock, folk, indie and latin music.

Justin Trawick and The Common Good’s debut record, “The Riverwash EP”, exemplifies the raw emotional live sound Trawick and the band have cultivated over the years playing in clubs and festivals up and down the East Coast. With instrumentation consisting of acoustic guitar, upright bass, fiddle, mandolin, and pedal steel, the band’s live performance plays fast and loose with the “Americana” genre, performing heartfelt ballads followed by raucous bluegrass melodies and even moments of hip hop verses. Written by DC based songwriter Justin Trawick, “The Riverwash EP” introduces the listener to Trawick’s unique brand storytelling with five original songs about love, loss, longing, resilience, and time pulling heartstrings of listeners young and old. Adam Levy (Norah Jones, Tracy Chapman) guest performs on guitar during “All the Places That I’ve Been”, a song inspired by Trawick’s ninety-seven year old grandmother and her stories of the World War II generation. Finally, the album closes with the band’s unique take on “Wonderwall” by Oasis, a track sure to trick the audience into thinking they’re listening to another Trawick original.