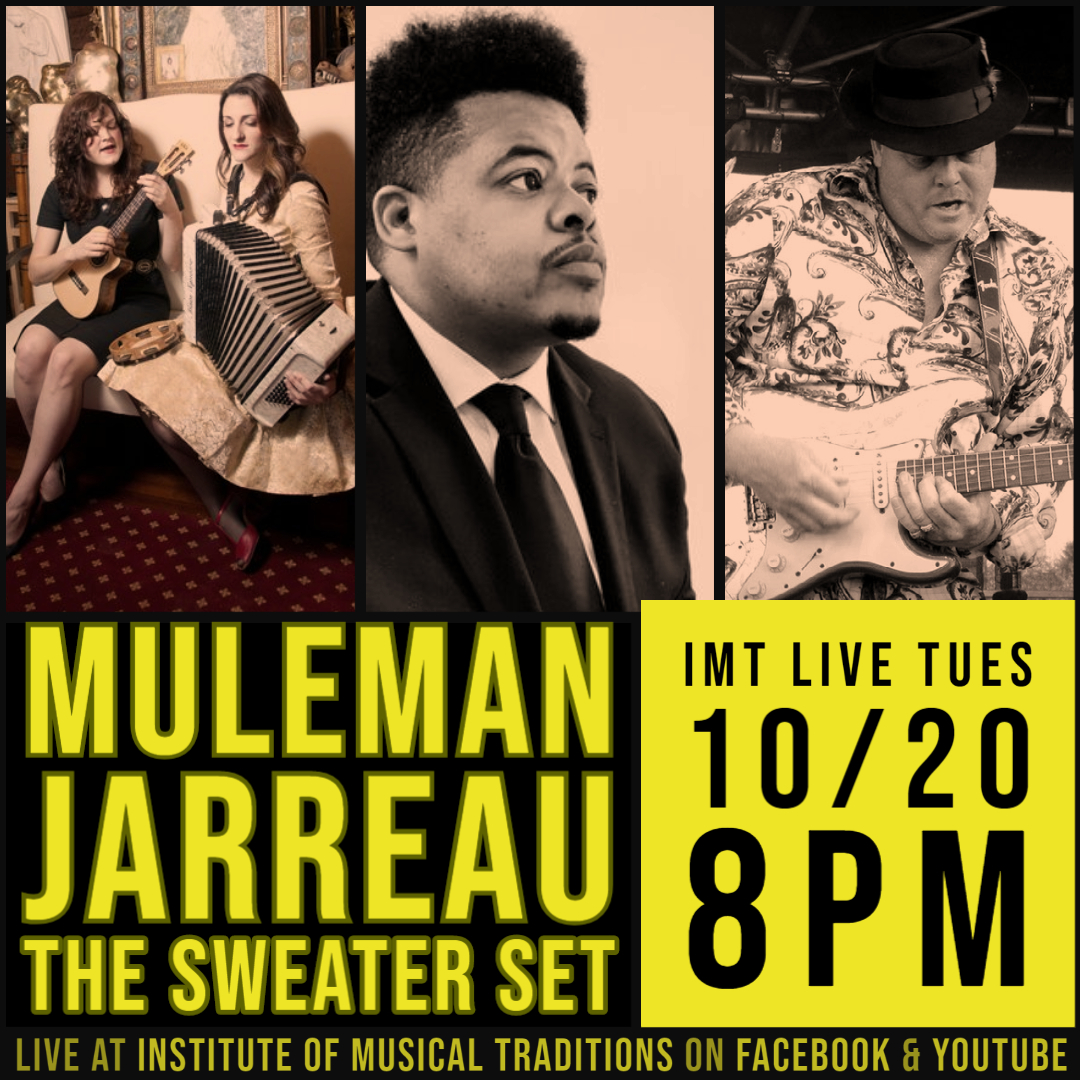 Dave Eisner hosting for a webcast with some favourite performers! Tune in Live at facebook.com/Institute.of.Musical.Traditions and / or youtube.com/imtfolk as we build our Traditions in a new way.

Born in the Mississippi Delta, Mark learned the true meaning of the Blues down on Parchman Farm Penitentiary. He was taught by David Kimbrough, the son of Jr. Kimbrough, how to play the guitar inside Parchman, and soon after, Mark joined the Parchman Prison Band. After Mark left Parchman, he followed his love for the Blues towards bettering himself. Along the way, he met the Blues legend Big Jack Johnson. He became both a mentor and friend to Mark and even gave Mark the nickname “Muleman”.

25 years later, Muleman has played a host of festivals all across Mississippi, including opening for B.B. King at his annual homecoming festival the last few years of B.B. King’s career. In 2017, Muleman traveled overseas to Crissier, Switzerland to perform at the Blues Rules Crissier Festival, and Bollenblues4 in the Netherlands as well as Haarlem, Holland. Muleman has been featured on the online blues show “Moonshine and Mojo Hands” and the culinary television show “Bizarre Foods” with Andrew Zimmern.

In 2016, Muleman’s story was documented by audio recordings into the Library of Congress. Muleman’s aspiring story and songs have touched his fans from all over the world. The combination of Muleman’s distinguished voice and captivating lyricism is a force to be reckoned with. Visit his website here : markmulemanmassey.wixsite.com

“the album bursts with optimistic energy that feels positively needed in the world right now.” – PopMatters

“Folk music is at its best when it helps uplift the listener in a deeper sense, and the Sweater Set has lavishly honed that ability on Fly on the Wall.” – Americana Highways

Around the DMV, Jarreau (juh-ROW) Williams is known as the “man with the golden pipes.” The Alexandria, VA native and recent Wammie nominated artist is a consummate showman and charismatic front-man who brings high-energy, soul, funk, groove and a special form of kindness to each one of his performances.

Williams and his band, JWX: The Jarreau Williams Experience, have been entertaining crowds at some of DC’s premier music venues such as 9:30 Club, Blues Alley, Farm Brew LIVE, and Jammin Java… and have appeared in major area music festivals like DC Music Rocks, PIKEtoberfest, The Wharf and Capitol Riverfront Summer Series.

Anyone who has seen Jarreau perform will agree, it is truly an ‘experience’ from the moment he grabs the microphone. His enchanting personality and extraordinary voice has a way of creating those special moments in performance; inviting you to join in the experience right along with him.