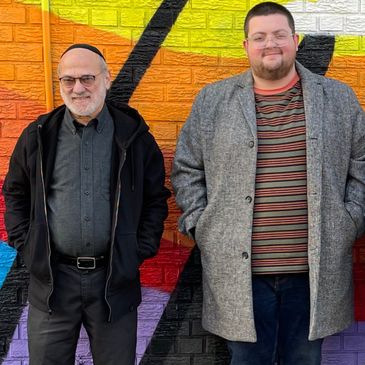 Jake Eddy is a bluegrass guitarist born and raised in Parkersburg, West Virginia. He began his music career and lifelong addiction to the road by playing banjo professionally at the age of fourteen with bluegrass-legend Melvin Goins. His guitar playing, which is primarily influenced by bluegrass and jazz, is showcased on his debut album of fiddle tunes, entitled “Jake Eddy,” which features such greats as Grammy-award winning Bryan Sutton, Rob Ickes, and Kenny Smith.

Andy Statman, one of his generation’s premier mandolinists and clarinetists, thinks of his compositions and performances as “spontaneous American-roots music and personal, prayerful hasidic music, by way of avant-garde jazz.” This modest man takes for granted that a performer might embody several worlds in his art, and seems humbled by the fact that his music, like his story, is extraordinary. This “conversation” changes each time they take the stage, with no melody sounding quite the same as it did before. A totally unselfconscious performer, Andy Statman leaves audiences elated and at times mystified, having experienced a musical performance unlike any other.

It’s unabashedly American music, Andy says, proud of his U.S. roots, and the spirit of individuality, creativity and compassion it embodies. Or it’s deeply religious hasidic prayer, intended to embrace his Jewish heritage, he explains in a soft voice. And it’s jazz, he’d say, on its lonely search for the spirit of lost worlds. It’s all of those things, because, although they may seem worlds apart, “They all come together in me. If you’re in touch with your Judaism,” Andy says, his voice cracking, “you experience things…” He is misty by now, and it is clear that this is a man who always speaks and plays from the very roots of his soul.