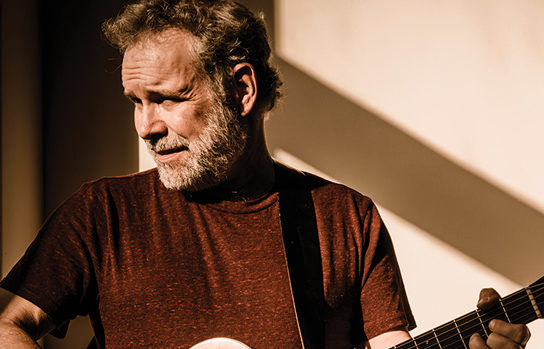 From New Jersey, John Gorka is a world-renowned singer-songwriter who got his start at a neighborhood coffeehouse in eastern Pennsylvania.

Though small, Godfrey Daniels was and is one of the oldest and most venerable music institutions and has long been a hangout for music lovers and aspiring musicians. In the late 1970’s, John was was one of these aspiring musicians. Although his academic coursework at Moravian College lay in Philosophy and History, music began to offer paramount enticements. Soon he found himself living in the club’s basement and acting as resident MC and sound man, encountering legendary folk troubadours like Canadian singer-songwriter Stan Rogers, Eric Andersen, Tom Paxton and Claudia Schmidt. Their brand of folk-inspired acoustic music inspired him, and before long he was performing his own songs – mostly as an opener for visiting acts.

In 1998, after five successful recordings and seven years at Windham Hill/High Street, John felt the need for a change and decided to return to his musical roots at Red House Records. The choice was driven, in part, by the artistic integrity that the label represents in an industry where the business of music too often takes precedence. Now with this, his 11th studio album, he returns to his roots with So Dark You See, his most compelling and traditional album to date.