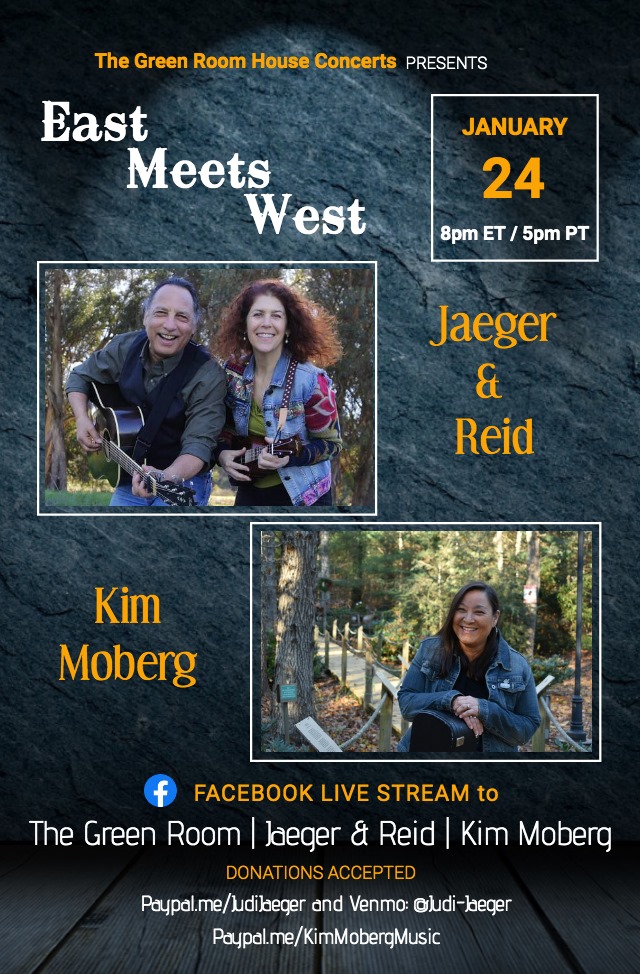 Award winning singer/songwriter Kim Moberg, a native of Alaska, began playing guitar at age 14 but for many years debilitating stage fright kept her from pursuing her dream of becoming a performer. In 2014, she set out to overcome that stagefright and wrote her first song.
Kim teamed with Grammy-nominated producer Jon Evans to record two albumns “Above Ground” and “Up Around The Bend”. Both recordings have received world wide airplay and critical acclaim, charting on the Folk International Folk DJ and NACC charts.
“Kim’s mighty pen is a source of amazing material that bridges the past with the future. She brings stories to life with harmonious melodies, and nothing can be more representative of that than her brand new LP Up Around The Bend. Kim’s stories are real, relatable and can connect each and every listener to their substance. In this world there are some people who write true organic music, music so real, and so important for our times, and that is Kim Moberg. It doesn’t hurt that she has an amazing voice to go with it!!” -Jon Sexauer, Country, American, Roots, Blues Music Promotion
www.kimmobergmusic.com
************************************
Some of the best discoveries are made by accident and that’s what happened in the fusion of the musical talents of Judi Jaeger and Bob Reid. They unwittingly found that perfect harmony while standing next to each other at a music camp jam in the summer of 2015. Their musical spark quickly caught fire and was noticed by those around them – and the successful collaboration between Jaeger and Reid was born.
Judi grew up near Montreal, Canada, where her world was filled with music; her mother and brother sang and played guitar and she listened to Leonard Cohen, Peter, Paul & Mary, Pete Seeger and many others. She began her career as a performing songwriter as an expression of her loss after the death of her mother and has written songs for her local domestic violence prevention organization. Bob is a fourth generation Californian, and like Judi, Bob also grew up surrounded by music. Bob’s Mom performed in coffeehouses in the 1960’s, while his father was a gospel concert promoter. Bob has been a California Arts Council Artist-in the Schools, performed at the United Nations in New York, in concert, at festivals and in schools across the United States. His original songs have been sung by Pete Seeger, Bill Harley, Cathy Fink & Marcy Marxer and many others. Bob was chosen by the Seeger family to perform at memorial concerts for both Pete and Toshi Seeger in New York. Bob has a keen eye for musicality, empowerment, appreciation of nature and social causes in his writing.
Jaeger & Reid have been performing around the San Francisco Bay Area and in New York and North Carolina, in a variety of venues including house concerts. www.jaegerreidmusic.com