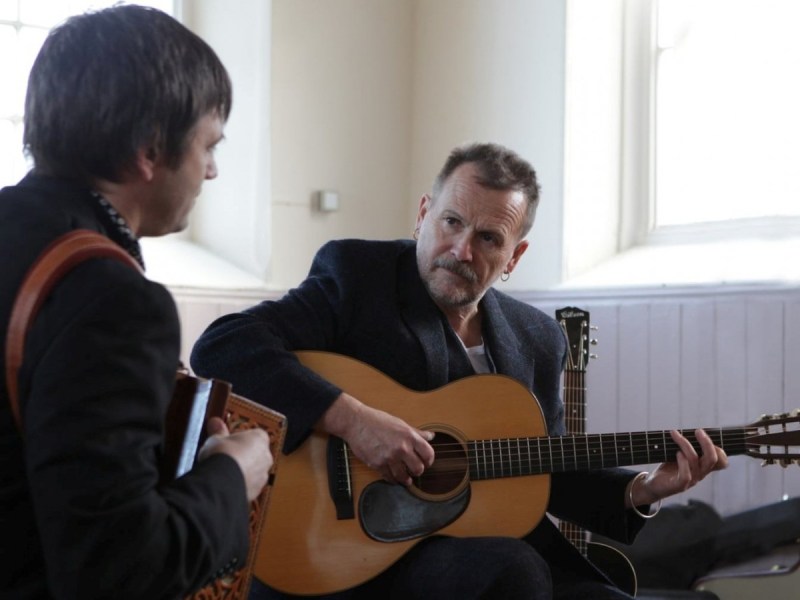 Live to your Living Room are delighted to welcome Martin Simpson and Andy Cutting for what we are sure is going to be an outstanding evening of beautiful music. Both artists have performed for us before, but this will be the first time we’ve seen them together as a duo – what better way to spend an evening?!

“Martin Simpson has transcended borders and oceans to quietly become a superb storyteller and musician of great depth and unquestionable taste.” – Stephen Fearing

The remarkable intimate solo performances Martin gives go from strength to strength – every gig is a masterclass. He travels the length and breadth of the UK and beyond, giving rapt audiences passion, sorrow, love, beauty, tragedy and majesty through his playing.

Universally acclaimed as one of the finest ever acoustic and slide guitar players, and a fine banjo-picker to boot, his solo shows bear witness to an artist at the very top of his game. In recent years, he has been a lynchpin in the award-winning Full English, The Elizabethan Sessions and, in 2015, recorded Murmurs, an exciting new album with Andy Cutting and Nancy Kerr.

He has had the most nominations of any performer in the 18 years of the BBC Radio 2 Folk Awards, an astonishing 32 times, 13 of those as Musician of the Year, winning that particular accolade twice.

“Hearing Andy Cutting play is like going through the wardrobe and finding Narnia. His music is glorious, joyful, moving, subtle, emotionally charged, a totally spell-binding experience that is never long enough”. – June Tabor

Andy is a musician’s musician (BBC Radio 2 Folk Award Winner Best Musician 2008, 2011 & 2016): a soulful and technically outstanding melodeon practitioner with an ear for a fine tune. He’s also a warm and emotive performer, modestly engaging his audiences with his self-deprecating wit and then flooring them with downright staggering musicianship. There are few melodeon players who put so much feeling into their playing, whether it is a set of dance tunes, or accompaniment to a slow English ballad.

Andy’s commitment to, and sense of pride in traditional music, as well as his sensitivity and understanding of the form, has made him one of the folk scene’s most wanted, playing with Kate Rusby, John McCusker and Under One Sky to name but a few. There is also a growing demand for him to play outside this genre (having recorded with Sting, John Illsley (Dire Straits) but most recently being asked to join The Who for an acoustic concert in aid of the Teenage Cancer Trust.