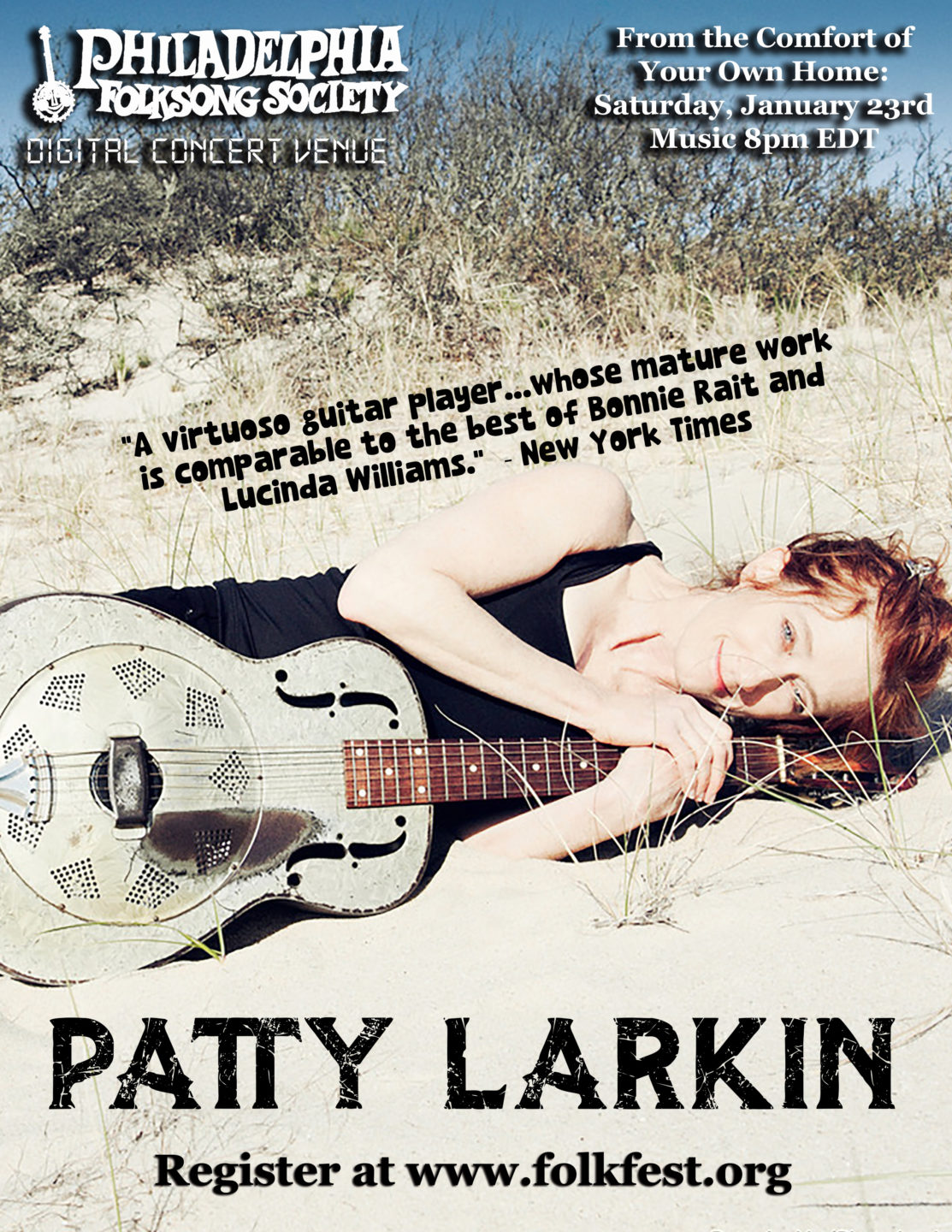 Okay Fest Family! We’ve heard you LOUD AND CLEAR! You don’t love having the Digital Concert Venue on Facebook, but you did love the digital Festival… SO LET’S MOVE THE DIGITAL CONCERT VENUE TO OUR DIGITAL FESTIVAL PLATFORM.

ALL CONCERTS WILL GO LIVE AT THEIR START TIME WITH AN INTRO FROM PFS AND THE ARTIST WILL BEGIN AT FIVE PAST. IF YOU ARE LATE OR MISS THE CONCERT, DO NOT FRET AS IT WILL BE AVAILABLE TO VIEW ON DEMAND FOLLOWING THE EVENT!

PATTY LARKIN is a visionary of sound and wonder, a real deal version of artistry made of equal parts guitar wizardry, vocals shot through with soul and inventive lyrics that ripple across the terrain of the heart. Described as “riveting” (Chicago Tribune), “hypnotic” (Entertainment Weekly), and a “drop-dead brilliant” performer (Performing Songwriter), Patty has captured audiences for over 30 years with an imagination, enchantment, and technical artistry that has redefined the boundaries of the guitar driven singer songwriter.

With eleven studio albums and two live recordings under her belt, Patty mines the intersections of poetry and song with her innovative 14th release, Bird in a Cage, released on her own Road Narrows Records. Bird in a Cage puts poems from ten notable poets to song, including US Poet Laureates William Carlos Williams, Stanley Kunitz, Kay Ryan, Robert Pinsky and Billy Collins, for a new and haunting collection that pulses with the magic of lyricism. Poems are made to be shared aloud, and with Bird, Patty takes up that tradition and sets it aglow: her extraordinary musical shadings make each poem a star.

Bird was co-produced by Patty and Mike Denneen (Aimee Mann, Howie Day, Jen Trynin, Letters To Cleo), who Patty has called her “musical compass.” Their collaboration spanned 16 years and 5 albums. The project is dedicated to his memory.


PLEASE NOTE THAT DUE TO ASSOCIATED TECHNOLOGY COSTS IN PROVIDING THIS CONCERT ON OUR OWN STREAMING PLATFORM INSTEAD OF FACEBOOK, WE ENCOURAGE YOU TO PLEASE CONSIDER PURCHASING YOUR TICKET AT THE $15/$20 OR ABOVE LEVEL IF POSSIBLE TO OFFSET THESE COSTS.