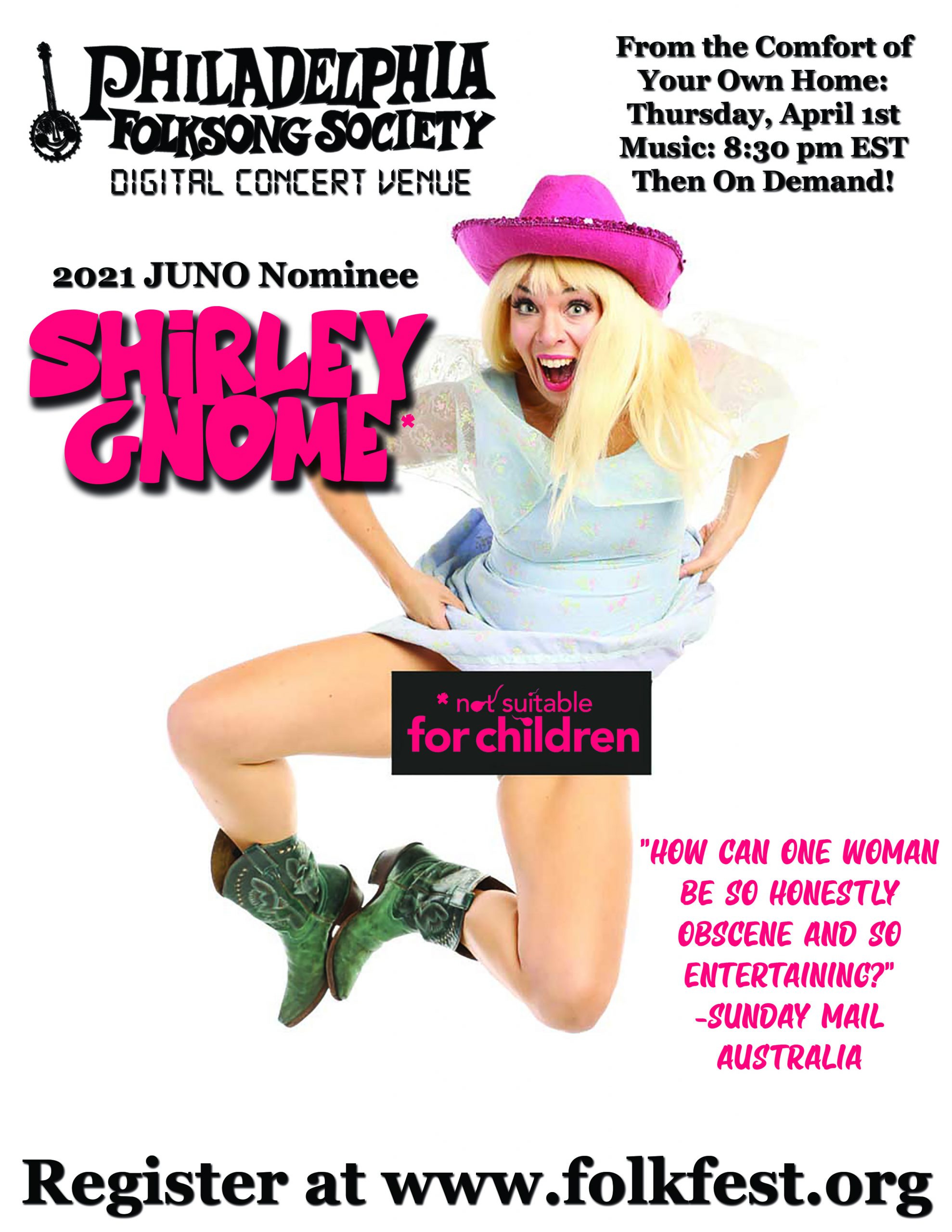 KEEP THAT FESTIVAL FEELING GOING ALL YEAR LONG WITH THE PHILADELPHIA FOLKSONG SOCIETY DIGITAL VENUE!
ALL CONCERTS WILL GO LIVE AT THEIR START TIME WITH AN INTRO FROM PFS AND THE ARTIST WILL BEGIN AT FIVE PAST. IF YOU ARE LATE OR MISS THE CONCERT, DO NOT FRET AS IT WILL BE AVAILABLE TO VIEW ON DEMAND FOLLOWING THE EVENT!

Join us for THE 2019 Philadelphia Folk Festival Discovery Act and the 2020 Top 3 International Act: SHIRLEY GNOME!!!

From the west coast of Canada comes this multi-award winning cabaret musician, whose all-original, uncensored music about human nature is hilarious, honest, subversive, smart, empowering, taboo and not for the faint of heart. Her cleverly carnal lyrics go down smooth with her inappropriately gorgeous vocals, and her charm will disarm you through even the most provocative topics. Her outlandish cover songs transform top 40 hits into dark social satire.

After a surprise win of Patrick Maliha’s The People’s Champ of Comedy in 2012, Gnome began working her charms in comedy clubs, music venues, and burlesque festivals across Canada. Gnome’s underground cult status got an international upgrade when she hit the Edinburgh Fringe Festival in 2013, receiving rave reviews. She continued this success by touring internationally, wowing audiences and critics alike with sell out shows across Canada, the US, Australia, and New Zealand. She closed out the Melbourne International Comedy Festival’s all-woman showcase UpFront in 2017. Her party anthem The Glitter Song went viral that same year, stacking up over half a million views.

She signed with 604 Records, and her 4th album Taking It Up The Notch debuted at #1 on the iTunes comedy charts in Canada when it debuted in 2017. In 2020, her follow up release with 604 Records (Comedy Here Often?), Decoxification, also went to number #1. She has released five full-length albums since her debut in 2009, which you can hear frequently on SiriusXM stations all over North America. You may have also heard her on Dan Savage’s chart topping podcast The Savage Lovecast.


PLEASE NOTE THAT DUE TO ASSOCIATED TECHNOLOGY COSTS IN PROVIDING THIS CONCERT ON OUR OWN STREAMING PLATFORM INSTEAD OF FACEBOOK, WE ENCOURAGE YOU TO PLEASE CONSIDER PURCHASING YOUR TICKET AT THE $15/$20 OR ABOVE LEVEL IF POSSIBLE TO OFFSET THESE COSTS.