SONGS FROM THE HEART, a live stremed (and on demand) concert. 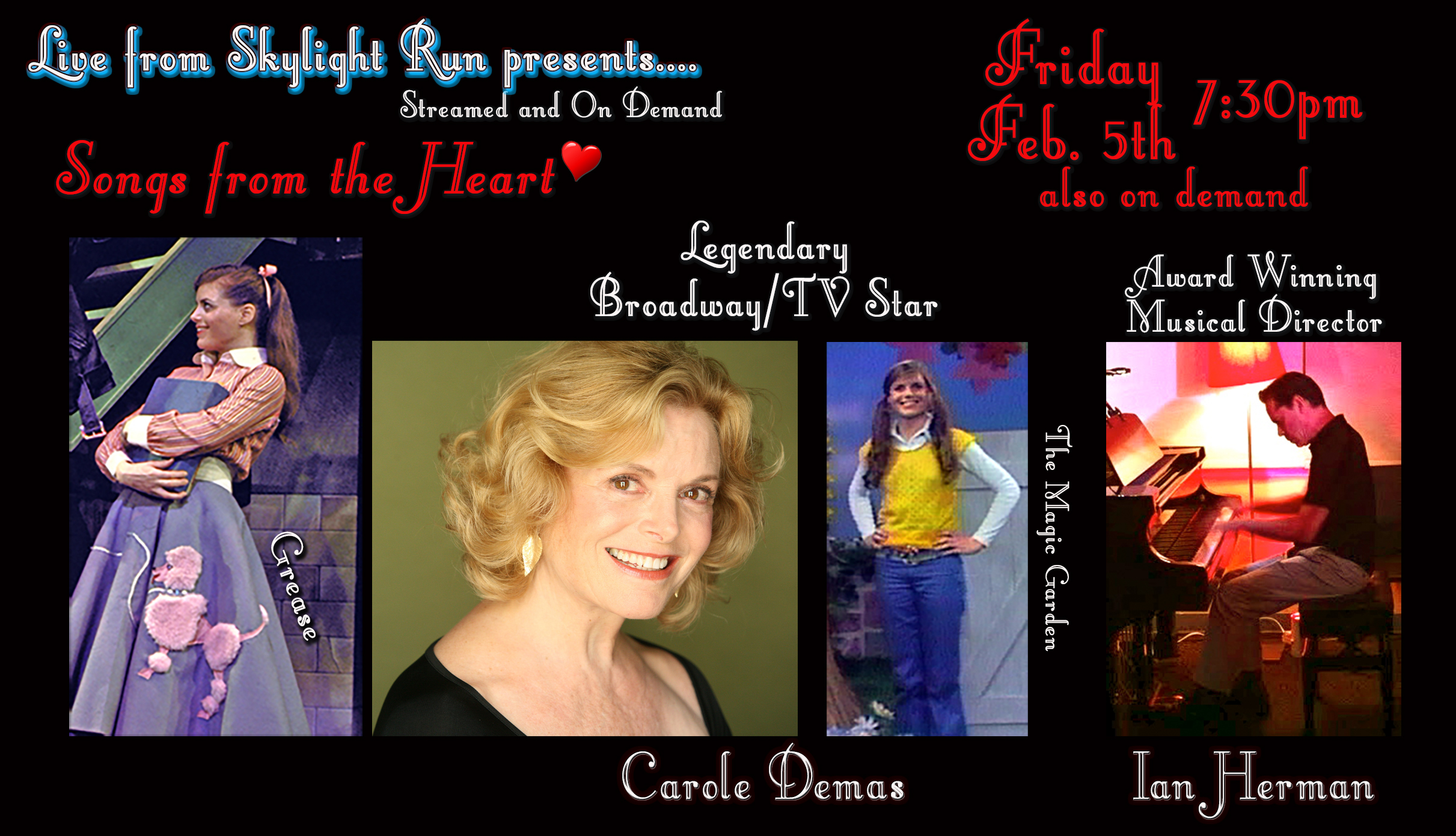 Legendary Broadway & TV star CAROLE DEMAS and featuring Award Winning music director IAN HERMAN
Songs From The Heart
A Live Streamed and On Demand Event
FRIDAY FEBRUARY 5TH – 7:30pm (live)
https://www.musae.me/skylightrun/experiences/886/live-from
This concert will bring a salute to Valentine’s Day, a very special nod to the 49th Anniversary of GREASE and some wonderful music and memories for everyone, with a set-list of heart-wrenching, sentimental and melodious songs from the book of love and some GREASE treasures.
The show features a wide variety of music from Broadway, Great American Songbook, folk, pop, classic rock, etc., accompanied by an award winning musician at the grand piano.
PROGRAM LIVE FROM SKYLIGHT RUN is a monthly concert bringing you Stars from Broadway and TV, performing in a delightful and intimate setting (Skylight Run) in Westchester, New York.
Carole Demas, who created the role of Sandy, in the original Broadway Production of GREASE, as well as the Title Role in THE BAKER’S WIFE, and created leading roles in numerous other shows, various Soap Operas and primetime TV dramas. She starred in the beloved and long running (12 years) THE MAGIC GARDEN. She continues (in NYC) to be an extraordinary singer, an engaging speaker with over 60 years in professional theatre. more at www.caroledemas.com
Carole’s wonderful versatility has been seen on camera in principal roles in over 200 commercials for television (everything from men’s cologne to peanut butter and often singing the jingles as well).
Carole played numerous guest star roles on classic prime time TV (including, KOJAK, MANNIX, ROUTE 66, BARNABY JONES, MAN FROM ATLANTIS, FANTASTIC JOURNEY (recently, BLUE BLOODS/CBS and ALLEGIANCE/NBC) and recurring roles on daytime dramas (EDGE OF NIGHT, ONE LIFE TO LIVE, AS THE WORLD TURNS). For the popular PBS Series GREAT PERFORMANCES, Carole joined other stars of the Great White Way for Lorimar’s SHOWSTOPPERS – THE BEST OF BROADWAY. On film, Carole starred in the 300 YEAR WEEKEND, with William Devane and THE SPACE WORKS for Trans-Lux Corp. Other films include appearances in: A LOVELY WAY TO DIE for Universal Films and the recently released THE DISAPPOINTMENTS ROOM.
Ian Herman: Music director, began his musical career studying classical piano. At the age of thirteen he was a guest soloist with the Pittsburgh Symphony Orchestra. After attending Manhattan School of Music, Ian worked with singers including Jane Olivor, Donna McKechnie, Anita Morris, Judy Kaye, Tom Andersen, Karen Mason, Sharon McNight, Marilyn Sokol, Angela LaGreca, Carole Demas, and Joy Behar in nightclubs in New York and around the country. In 1999, he received the Backstage Bistro Award for Best Musical Director. Ian’s Broadway credits include: JELLY’S LAST JAM, THE WHO’S TOMMY, SONG AND DANCE, GREASE, LAUGHING ROOM ONLY with Jackie Mason and SWING for which he wrote vocal