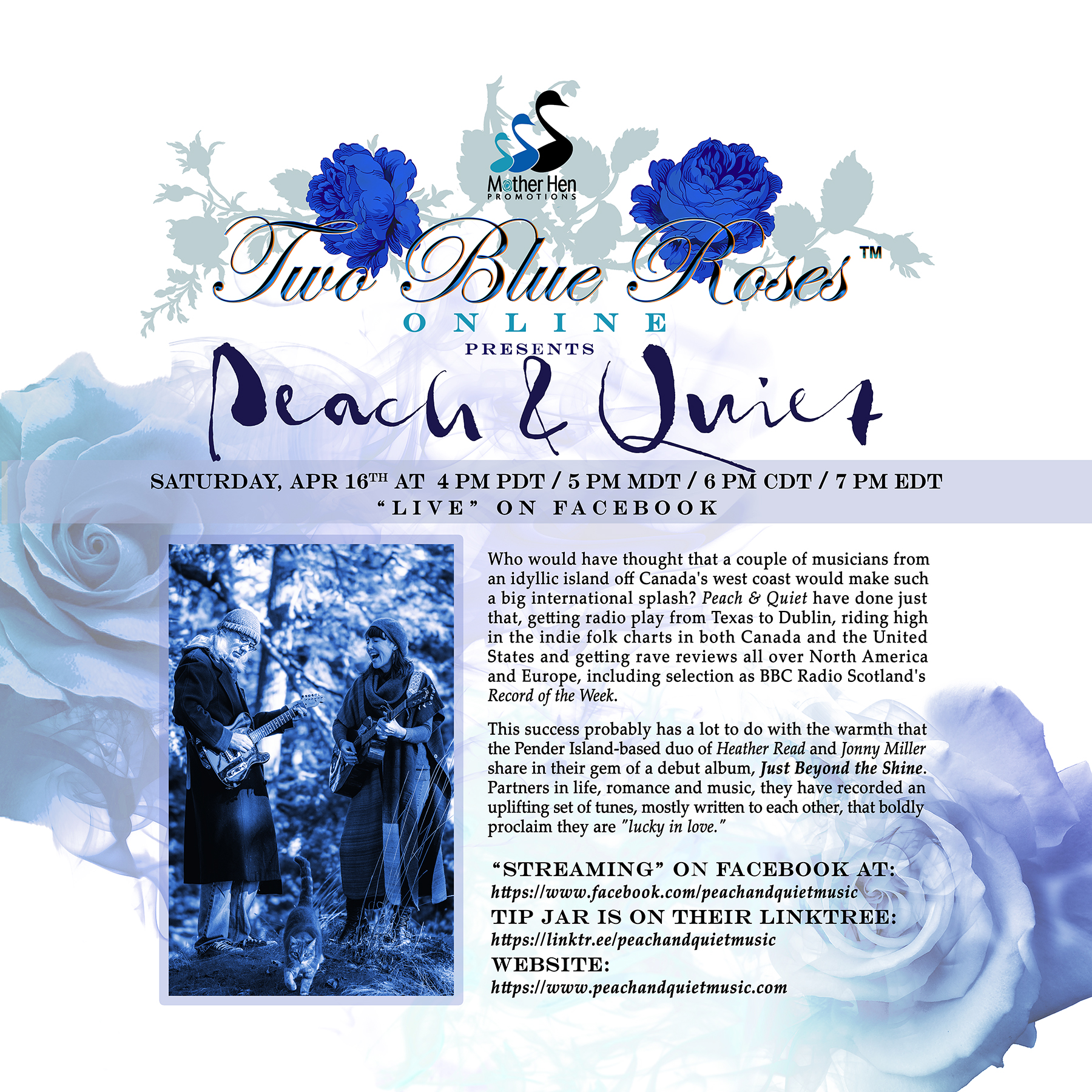 Who would have thought that a couple of musicians from an idyllic island off Canada’s west coast would make such a big international splash? Peach & Quiet have done just that, getting radio play from Texas to Dublin, riding high in the indie folk charts in both Canada and the United States and getting rave reviews all over North America and Europe, including selection as BBC Radio Scotland’s Record of the Week.

This success probably has a lot to do with the warmth that the Pender Island-based duo of Heather Read and Jonny Miller share in their gem of a debut album, ‘Just Beyond the Shine’. Partners in life, romance and music, they have recorded an uplifting set of tunes, mostly written to each other, that boldly proclaim they are “lucky in love.”
It’s hard to believe that it was only in 2019 that Heather and Jonny found each other, emotionally, spiritually and musically. They discovered quickly the joy of singing together, which extended into songwriting. They both have the gift of poetic sensibility and abstraction that give birth to such lines as “Open me slowly, and you will find. Eternal darkness and infinite light.” Somehow Heather’s crystal clear voice blends seamlessly with Jonny’s slightly gritty “character” vocals to a sound that is greater than the sum of its parts.
Thanks to modern technology, tracks were recorded in Nashville, Toronto and Vancouver, as well as Victoria and Pender Island. Steve Dawson, the guitar and production wizard who makes his home in Nashville, produced five of the tracks, while Adam Dobres, one of western Canada’s top musicians and a neighbour of Heather and Jonny on Pender, produced the rest. The result is a stunning piece of “Americanadiana,” complete with jangly guitars recalling the Byrds, whining steel guitar that could have graced George Jones and Tammy Wynette albums and vocal harmonies that bring to mind Gillian Welch and David Rawlings. As several reviewers have remarked, the sound is reminiscent of the heyday of Laurel Canyon.

Jonny and Heather were both born to play music.

Welsh-born Heather sang with her dad’s band at legion halls in Ontario when she was four-years-old and she began songwriting at age 7. She took a long break from music to pursue a master’s degree and work in the publishing industry, which she currently does by day running her own publishing rep agency. Heather jumped back into music when she moved to Victoria in 2013, when she started two local folk bands, founded a local songwriter circle, and published lyrics in two different poetry collections.
Jonny was raised by his mom, who was the first female radio engineer in Western Canada and worked at Co-op Radio in Vancouver. His dad is a reggae DJ in the U.S. and introduced Jonny to reggae and California rock. Jonny started earning a name as a singer-songwriter thirty years ago and has won Vancouver Island Music Awards and a People’s Choice award for accompanying a video in the Victoria Film Festival. In 2018 his song “One In a Million” was chosen for a Spotify Hot Release.

Heather and Jonny are currently working on recording their second album for release in 2022.

The chemistry and warmth between Heather and Jonny in their music is undeniable. Come feel the love.