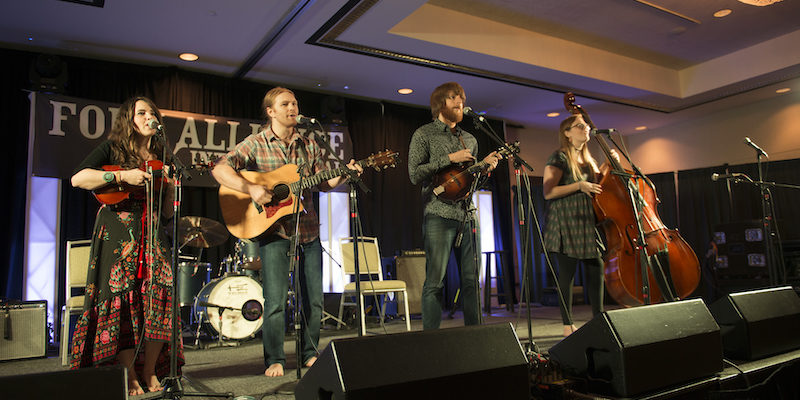 The American Folklife Center (AFC) at the Library of Congress joins with Folk Alliance International in inviting YOU to “Take the Archive Challenge!” The AFC Archive was established at the Library in 1928, and its unparalleled collection of sound recordings of traditional music include everything from the first wax cylinder recordings of Native American song, to John and Alan Lomax’s pioneering disc-era recordings, to recent born-digital documentation of folk concerts of all kinds. Best known performers in the Archive include Muddy Waters, Pete Seeger, Honeyboy Edwards, Woody Guthrie, Aunt Molly Jackson, Lead Belly, Doc Watson, Bill Monroe, and Jean Ritchie… but there are millions of great songs, tunes, and stories from thousands of performers you’ve never even heard of!

Searching through a digital archive to find great material can be like panning for gold… but with some patient sifting, you’ll be rewarded with a gold nugget!

How can you find songs and tunes in the AFC Archive, so you can choose one to make your own? There are several easy ways:

*To find great material collected by folklorists such as John and Alan Lomax, Zora Neale Hurston, Herbert Halpert, Stetson Kennedy, Alan Jabbour, and many others too numerous to mention, go to American Folklife Center’s Online Collections. There you’ll find a menu of AFC Archive collections that we have digitized for your use. Browse the descriptions of each collection to see which ones interest you the most, then dive in! From songs and stories of Dust-Bowl-era migrant workers to Ohio canal songs, African-American gospel, Spanish-language hymns from New Mexico, work songs from the railroad gangs and turpentine camps of late 1930s Florida, and Virginia fiddle tunes… there’s sure to be something that floats your boat.

*Learn a song or tune from a contemporary performer in one of AFC’s Homegrown Concerts! The benefit to this method is that you’ll be watching videos of the performances instead of just listening to the recordings. Every genre you can imagine, including Gospel, Old-Time, Irish, Conjunto, Blues, Polka, Rockabilly, Bluegrass, Klezmer, Western Swing, Scandinavian fiddling, Cowboy Songs and Poetry, and much, much more! Webcasts of concert performances from 2002 to 2015 are archived here.

*Visit the Association for Cultural Equity (ACE) website, and go to “Lomax Digital Archive” under the “Archive” tab for recordings from Alan Lomax’s long career after 1942. ACE’s website contains over 17,400 digital audio files you can listen to online… including Lomax’s first recordings onto (newly invented) tape in 1946, and tracing his career into the 1990s. Once at the ACE website, you can click on links for sound collections, video collections, and radio shows to find songs, tunes, stories, jokes, and sermons (you are not limited to performing only music on the 40th Anniversary Showcase!) Choose from blues, Cajun, calypso, Appalachian songs and stories, old-time string band tunes, music from Scotland, Ireland, and so much more!

Lomax’s recordings of rural Kentucky music and lore collected between 1933 and 1942 — including ballads, play-party ditties and comic pieces, topical and protest material, fiddle and banjo tunes, hymns and sacred songs, children’s games and lullabies, jokes, and tall tales, have been folded into the Lomax Digital Archive. Visit the Association for Cultural Equity (ACE), and go to “Lomax Digital Archive” under the “Archive” tab.

Lomax’s 1941-1942 Mississippi Delta survey has been folded into the Lomax Digital Archive. These 27 hours of recordings were made in the summers of 1941 and 1942 under the auspices of a creative collaboration between the Library of Congress and Nashville’s Fisk University. The key players were Fisk’s John W. Work III, who served as the presiding musicologist; sociologist Lewis Jones, also at Fisk, and folklorist Alan Lomax representing the Library of Congress. The field workers recorded secular and religious music, sermons, children’s games, jokes, folktales, interviews, and dances. The recordings include incredible treasures of early blues and spirituals, including the very first recordings of Muddy Waters, alone and with the Son Sims Four. Visit the Association for Cultural Equity (ACE), and go to “Lomax Digital Archive” under the “Archive” tab.

For Lomax’s 1938 field trip to Michigan and Wisconsin, in which he recorded songs and stories from twelve different ethnic groups, plus the occupational folklife of loggers and lake sailors, view the collection here.

For Lomax’s 1934 field trip to Louisiana, in which he recorded both English-language ballads and blues and French-language Cajun and Creole music, view the collection here.

There, you can click on the link “Iconic Song List” — a list of over 100 “classic” folk songs and traditional tunes that the Lomaxes documented through their field recordings, or increased public awareness of through commercial recordings, publications, radio programs, and concerts. Chances are, you know one or two of those songs already (though we’d love for you to dig even deeper, and learn a new or rare one!)

Audio collections from the AFC Archive at other websites:

The James Madison Carpenter Collection contains one of the most significant collections of British folk music made in the 20th century. The Mississippi-born Carpenter (1888-1983), studied under George Lyman Kittredge at Harvard University and received his doctorate in 1929. Immediately, he set off for the United Kingdom, where over the next six years, he collected over 6,000 song texts, 500 versions of folk plays, as well as narratives, games, and other traditions. In addition, Carpenter’s subsequent work in the United States yielded an important body of material, including some of the earliest and best African-American narrative recordings. Although the sound quality of the wax cylinder recordings can make them challenging to listen to, there are often transcriptions of the songs and tunes in standard music notation, as well as typescripts of the texts for the ballads and songs.

The Wisconsin Folksong Collection, 1937-1946, contains Wisconsin field recordings, notes, and photographs made by UW-Madison faculty member Helene Stratman-Thomas during the summers of 1940, 1941, and 1946; and recordings collected by song catcher Sidney Robertson Cowell during the summer of 1937. The materials are shared between the Library of Congress and the University of Wisconsin. Over 900 performances representing more than thirty ethnic or geographical sources are included. While vocal music predominates, instruments such as the accordion, guitar, Hardanger fiddle, psalmodikon, and tamburica were also recorded.

The Minnesota Folksong Collection is an online digital library for audio field recordings, song texts and other materials documenting traditional folksong from Minnesota. The current collection consists of 44 songs recorded by folklorist Robert Winslow Gordon in 1924 and deposited at the Library of Congress.

One of the nation’s great archival collections of New England folksong, folklore, and balladry, the Flanders Ballad Collection was the lifework of Helen Hartness Flanders (1890-1972), of Springfield, Vermont.  Over the course of thirty years, and with the assistance of Marguerite Olney, Flanders gathered and preserved more than 4,800 field recordings of New England folksongs and ballads as sung by native Vermonters and other New Englanders. In May, 1941, she donated the collection to Middlebury College with the proviso that it be kept in a “fireproof environment” and that it should be used as a resource for academic and scholarly research. This collection contains notebooks, cylinder recordings, and printed materials not shared with AFC, but AFC has most of the disc sound recordings listed as “Archival Cassette Dubs.”

MacEdward Leach and the Songs of Atlantic Canada

These recordings were made in Newfoundland and Nova Scotia by Leach from 1949 to 1951. They include sound filed of songs in Newfoundland English and Scottish Gaelic, along with transcriptions of the words.

The Ruth Rubin Legacy highlights the renowned vocalist and scholar’s collection of over 2,000 Yiddish songs performed by some of the most extraordinary traditional singers of the 20th century, including Rubin herself. The 78rpm acetate discs, reel-to-reel tapes and cassettes recorded by Rubin between 1946 and the 1970s are in the process of being painstakingly re-assembled and are made truly accessible here for the first time. Ruth Rubin’s entire life’s work can be found on this site: field recordings, lectures, concerts, radio interviews, videos, manuscripts and published materials.

View The Collection
*If you prefer learning your songs from musical notation on the printed page, you can go to your local library or bookseller and find a copy of one of the Lomaxes’ published song collections:

Books from other collections in the AFC Archive:

Lindahl, Carl. American Folktales: From the Collections of the Library of Congress. New York: Routledge, 2003.

We hope you’ll participate in the Archive Challenge by putting your own artistic stamp on one of the timeless treasures from the AFC Archive. Together, we’ll raise our voices to reaffirm the beauty and diversity of the folk traditions documented here, and the communities from which they came.

The Archive Challenge Showcase is a co-production of the American Folklife Center at the Library of Congress, and Folk Alliance International