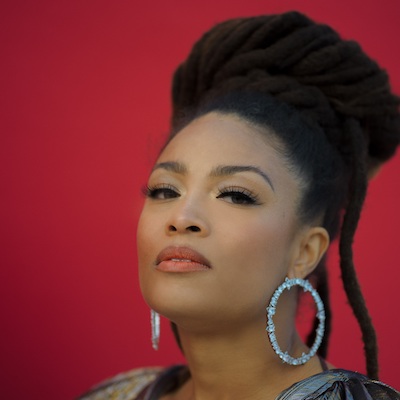 Presented in-person at the

The keynote will be presented live, in-person at the Westin Crown Center Hotel in Kansas City, MO.

Valerie June is a GRAMMY-nominated artist from Tennessee who has been hailed by the New York Times as one of America’s “most intriguing, fully formed new talents.” Her 2021 release, The Moon and Stars: Prescriptions for Dreamers, included two songs featuring legendary Stax singer and “Queen of Memphis Soul” Carla Thomas, one of which went on to be nominated for Best American Roots Song at the 2022 GRAMMY Awards, along with her 2014 Emerging Act of the Year nomination.

A musician, singer, songwriter, poet, illustrator, actor, certified yoga and mindfulness meditation instructor, and author, she honorably served as a Turnaround artist working with students for the President’s Committee for the Arts and Humanities and continues serving through The Kennedy Center. Her first book, ”Maps for the Modern World,” was an Amazon #1 Best Seller in poetry and is a collection of lyrical poems and original illustrations about cultivating community, awareness, and harmony with our surroundings as we move fearlessly toward our dreams.

June also has an upcoming children’s book, “SOMEBODY TO LOVE: The Story of Valerie June’s Sweet Little Baby Banjolele”, out on November 1. The story is inspired by how June wrote the song “Somebody to Love” from her album Pushin’ Against a Stone.